PrettyPrinter is a powerful, syntax-highlighting, and declarative pretty printer for Python 3.6+. It uses a modified Wadler-Leijen layout algorithm, similar to those used in Haskell pretty printer libraries prettyprinter and ansi-wl-pprint, JavaScript's Prettier, Ruby's prettyprinter.rb and IPython's IPython.lib.pretty. It combines the best parts of each and builds more on top to produce the most powerful pretty printer in Python to date.

Here are some pretty screenshots to demonstrate PrettyPrinter output: 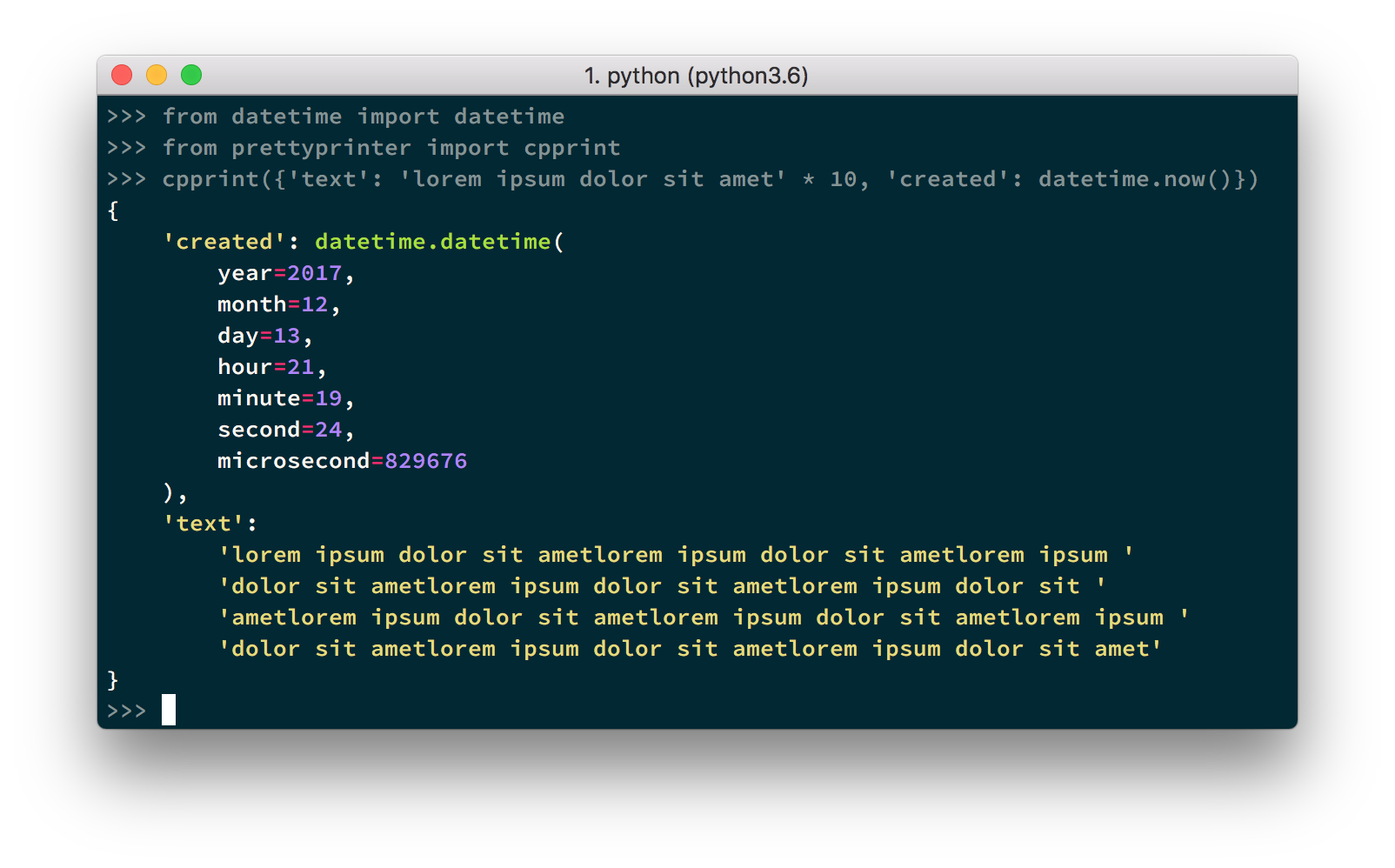 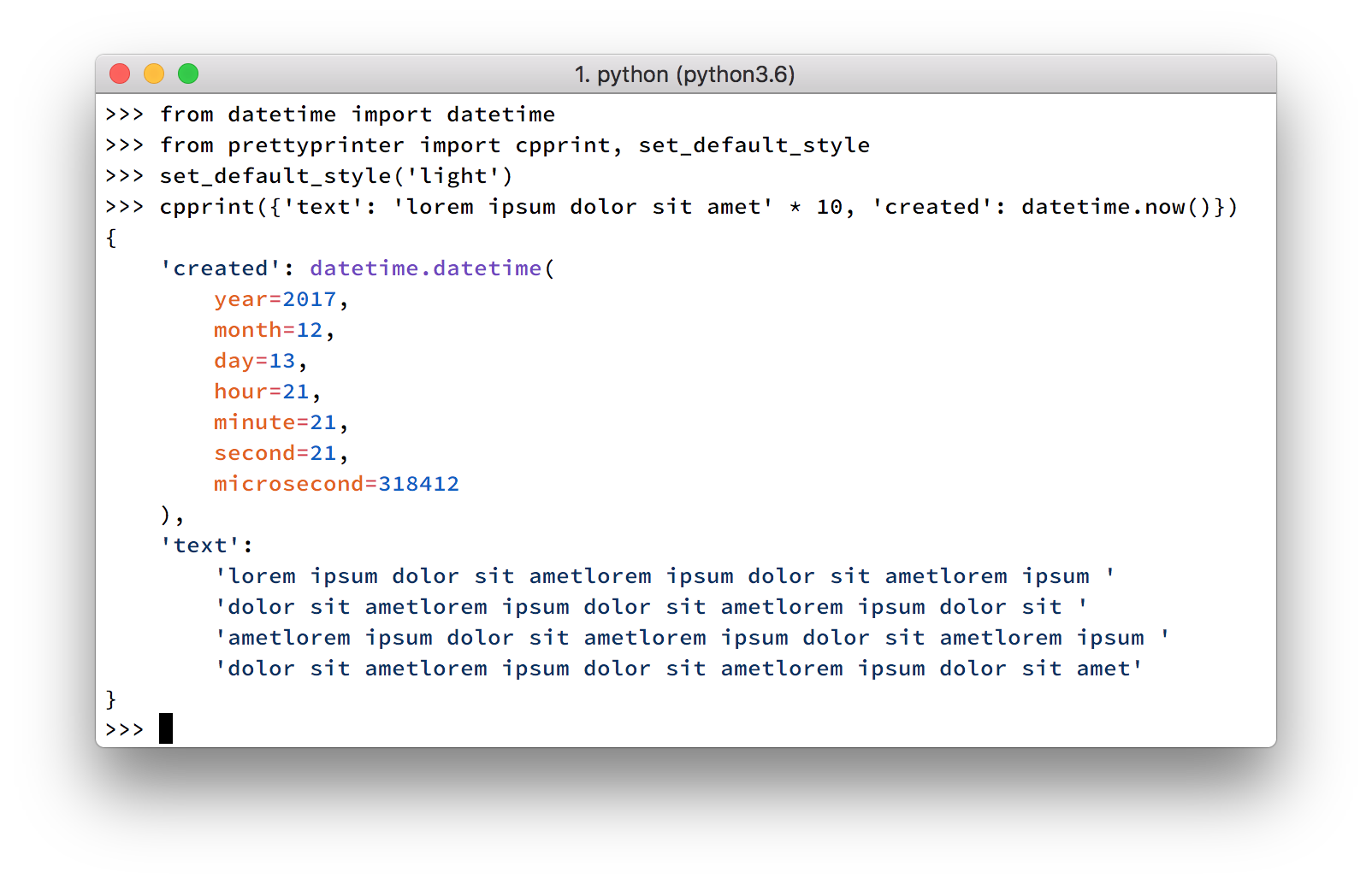 Why does Python need another pretty printer?

Printing data to the screen is a developer's primary interface to values in a runtime, whether that's done by an IDE or manually by the developer. Improving that interface goes a long way to improve development experience and productivity. Python and third party libraries provide tools to help with that:

All of the above fall short of what I consider a great pretty printing experience. I set out to make the following improvements:

I was surprised by how well the library turned out. The algorithm works superbly, and is fast enough. To define your own pretty printers, you only need to know two declarative functions, register_pretty and pretty_call. The syntax-highlighting looks beautiful, and doesn't break on invalid syntax. Especially the syntax-highlighting makes it hard to go back to normal pretty printers, it helps the development experience significantly.

The most interesting improvement is the declarative API—here's a rundown of how it works.

Defining pretty printers in PrettyPrinter is based on (constructor) function calls. All non-literal Python values should be represented as such. The workhorse function of the library is pretty_call, which allows you to describe what kind of function call PrettyPrinter should output. For example, given the following pretty_call call:

(The ctx passed as the first argument allows you to control how any nested data, in this case the list [5, 3, 6, 1] and the True value in the reverse keyword argument are rendered. Most of the time, it is passed as is.)

Given that we understand how to use pretty_call, let's define our own type:

Using the register_pretty decorator, we can define the pretty printer for MyClass:

The output from cpprint expectedly is:

A drawback of constructor calls is that they don't represent stateful instances well. Generally you want some kind of extra output that indicates instance state. PrettyPrinter handles this with declarative comments, a powerful feature I'm pretty excited about. Annotate a Python value (or a layout primitive representing a Python value) with a comment, and the output will magically include the comment next to it in the output.

Consider a Connection class with a state that is either open or closed:

If we want the following output:

We can achieve that with the following definition:

I've enjoyed using PrettyPrinter as a part of my development toolkit. There's a lot more to it than what I can go through in one article, so I suggest you give it a try! I recommend using it with IPython, as everything you evaluate in the REPL can be automatically printed using PrettyPrinter. The instructions to set that up can be found in the documentation.

Check out the source code on GitHub and the (still slightly rough) documentation on readthedocs.io. The package includes ready-made definitions for Django Models and QuerySets, as well as any class created using the attrs package, so if you're using either you'll definitely want to give it a spin!